"Great artists are those who impose their personal vision upon humanity.- Guy de Maupassant 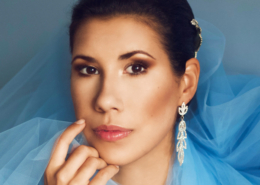 Born in Chiavari, at the age of 14 she began singing studies privately with Cira di Gennaro; she graduated, with top marks, at the Paganini Conservatory of Genoa, only 21 years old, under the guidance of Maria Trabucco; currently she is perfecting the vocal technique and the repertoire with the sopranos Desirée Rancatore and Maria Argento.

She was assistant professor and music critic Roberto Iovino at the Faculty of Educational Sciences of Genoa and speaker for the project Historic Theaters of Liguria.

During the period of studies in the Conservatory she won the “Giovanna Mutti” scholarship, she performed as a soloist in concert with the chamber music repertoire presented in the competition, she was part of the chorus of the opera Dido and Aeneas by H. Purcell staged at Carrara Academy of Fine Arts and at the Sala del Colonnato in Palazzo Meridiana in Genoa, and also performs in concerts with the madrigal group “Vox Antiqua” as well as in the operatic field: Noye’s Fludde (Jaffet) by Britten at the Palazzo Ducale in Genoa; The honor of Poppea (Poppea) by Monteverdi staged in the Concert Hall of the Paganini Conservatory in Genoa.

Winner of several international opera competitions including: Alfredo Giacomotti, Marco Koliqi of Milan, City of Iseo Franco Ghitti; Spiros Argiris Award, Bellano Country of Artists, Valsesia Musica, Salvatore Licitra. She is the winner of the 69th As.Li.Co. for Young Singers for the role of Contessa di Folleville in Rossini’s Il viaggio a Reims.

She made her debut in Die Zauberflöte (Queen of the Night) at Teatro San Carlo in Naples with footage of the same production at the Teatro Argentina in Rome, at Teatro Comunale Mario Del Monaco in Treviso and at the Roman Theater of Ostia Antica; La Rondine at Teatro Carlo Felice in Genoa; L’elisir d’amore (Giannetta) at the Macerata Opera Festival directed by Damiano Michieletto and directed by Francesco Lanzillotta (production broadcast on Rai5).

Carries out an intense concert activity: at the ONU Hall of the Teatro Massimo in Palermo on the occasion of the Salvatore Pollicino Award, at the commemorative concert “40 years after Callas” in Sirmione; at the concert of the winners of the International Competition Alfredo Giacomotti at the Teatro Bibiena in Mantova and at the Gala Lirico Fuoco di Gioia at the Teatro Regio di Parma for the Verdi Festival.

There are no scheduled events for this artist!